If you know someone, and by someone, I mean a relative, co-worker, friend, or even a boss, then the chances are pretty good you know someone with migraines. Now there are quite a few different kinds of migraines and just like having friends over, you can have one or more kinds simultaneously. Unlike friends, they don’t mix well together.

But today I won’t be going into detail about the different types of migraines, because in the Migraine World, that’s small talk, and I’m more of a “let’s discuss your philosophical views of moral absolutism and why there seem to be so many dog parks but no cat parks” kind of girl.

I’d also much rather hear about your fondest childhood memories or basically, your opinion on anything you are passionate about! Just please don’t ask me about the weather, because I love it all equally, even though most weather conditions makes my head throb really bad.

So now that we’re acquainted a bit better and I’m back on track; do you recall what I said about knowing people? Well, turns out almost 1 in 4 U.S. households includes someone with a migraine. I’d say that’s pretty good reason to know what a severe migraine attack may look like.

Of course, migraine attacks are extremely different for each migraineur. Additionally, it can get a bit technical.

The Stages of Migraine

Typically, “migraines” have four stages: prodrome, aura, the actual migraine attack, and postdrome. Not all migraineurs experience all four stages and sometimes the stages overlap. For some, one stage is worse than others.

I experience all four. Often my stages overlap. That is a hell I wish on no one. I have (diagnosed) chronic migraines. As many as 50% of migraineurs go undiagnosed.

For many diagnosed migraineurs, pain scales are introduced. Although pain is subjective, there are a variety of scales available and methods of tracking pain, allowing individuals and their medical team to identify patterns and learn what works best for them.

I have these severe attacks about four times a week. Sometimes less, sometimes more. It’s all a numbers game. 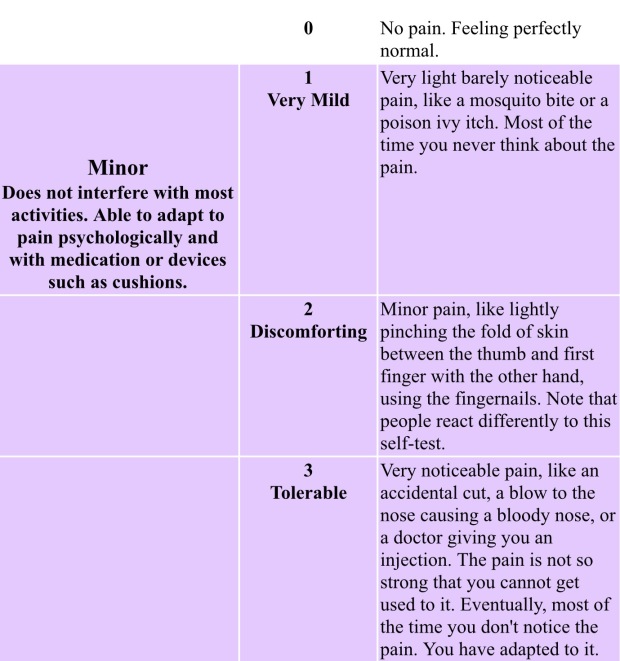 Picture a woman in so much pain, she should be in the ER, but instead she is frantically pacing around her home, looking for something that may help her feel better, knowing very well there is nothing. A few hours ago, her pain was a level 4, now it is a 6 and she knows where it’s heading.

Mid-pace, she breaks down in tears, the next moment she is on the kitchen floor, not sure if she slipped or intentionally sat down. Her migraines makes her lose her balance a lot, so she probably slipped.

Her husband tries to guide her to their bedroom, aware that the eye of the storm is upon him. But the combination of brain fog, anger, mood swings, increasing pain and hopelessness makes her irrational.

She insists she wants to go shopping. Still on the floor. Pain so intense, her body weighed down. The damp air makes it feel like she is suffocating. The pain has reached level 8. Now hysterical she frantically tries to search for something online that she can neither see through her blurred vision nor type the words trapped in her mind.

Again, her pain robs her mind. Often brilliant when the pain is low, but when it is high it makes Hyde look sane.

Eventually she finds her way to their dark and cool bedroom, still sobbing frantically, sure by now all the doctors are wrong because it feels like her head is about to explode. It must be something really bad, as if what she has isn’t bad enough.

The next minute, she is crying out for chocolate, cake, or anything consoling to heal her beaten soul. Knowing it would make her pain even worse minutes later. She is willing to trade those few minutes for a few seconds of relief of this mental anguish.

Level 9. She ignores the fact that she can barely bring water to her lips to drink and still demands the chocolate, crying. Begging for medicine. Ice picks shooting through her head to the rhythm of the intense throb. She says a silent prayer for it to end.

Knowing the rebound migraine is even worse; her husband lovingly takes out the essential oils and tries to calm her. However, she is lost, for now. The pain is winning tonight. She knocks over the water glass as she tries to drink again.

Drained, she rummages through the bedside drawer, stacked with vitamins, preventatives, rescue medications, over-the-counter medication, essential oil mixes, and all her other migraine remedies. She doesn’t use the rescue meds; they are too expensive. She tries to use natural treatments. But tonight it’s too late. It’s too late for anything.

Tonight she is lucky. It knocks her out.

Tomorrow she will wake drained, confused and tired. Still in pain but relieved. The war may never end but she won one more battle and she will continue to fight. Because just like millions of others, she is a migraine warrior.

2 thoughts on “A Glimpse into a Severe Migraine Attack: The Mental Anguish”