In the month of October we are all about Girl Power, bringing awareness to several different topics, but one in particular for my story: domestic violence. My story is about finding and using GIRL POWER.

My story begins with migraines — always migraines — a marriage steeped in the cycle of abuse, chronic pain, and how they all feed one another. This might seem an odd beginning to a post about Girl Power, but trust me and follow my journey. You will see just how strong a girl can be when it really matters!

I started having misgivings about marrying “Micheal” about six months before the actual wedding. There were signs of narcissism, control, and guilt-blaming even then. As a woman who had volunteered at the abused women’s center in our area, I knew all the signs and they were all there in front of me.

When I voiced my concern to friends and family they said it was normal “pre-wedding jitters.” The closer the wedding day got, the more there were warning signals and the more excuses. The more excuses and tension, the more migraines and pain.

LESSON: LISTEN TO YOUR INTUITION

Abuse isn’t always physical. What Micheal was doing at this point, from the outside, couldn’t be “seen” and what could be seen was put down to stress. The more intimidation, emotional abuse, and isolation from no one seeing, or wanting to see, what was going on, the more migraines and pain.

At this point the wedding invitations had gone out and I was told repeatedly how wonderful Micheal was. The abuser can be very charming and charismatic on the outside. A narcissist wants everyone to love them — they want everything to be about them.

This is the face of mental and emotional abuse. Abuse is all about power and control. The abuser or narcissistic person must ALWAYS maintain control. Because Micheal couldn’t control his work atmosphere, all of his need for control, for attention, for power were concentrated on me and my family. He completely charmed my mother, bringing her flowers, defending her against an angry neighbor, and complimenting her cooking — which, by the way is AMAZING. He talked to my father about history, the military, and who knows what else.

All this time I was dealing with the emotional abuse, intimidation, threats, and isolation. All my concerns were “in my head” as were my migraines.

After the wedding — where the unity candle wouldn’t light, and the air conditioning in the reception hall broke down in AUGUST, all of which induced a complicated migraine for which I got blamed for being drunk — I discovered Micheal’s best friend was coming on the honeymoon with us. They spent more time together than Micheal and I did alone. When I complained, something I learned right then not to ever do again, Micheal exploded. His power and control were complete and I was trapped in the cycle of abuse.

Abuse is a two way street; you only receive what you allow. When I said “I DO” in front of God and all my loved ones, it was a covenant with God, Micheal, and I. The only problem was, now that we were married and then transferred to Chicago, Micheal stepped out of the covenant and his abuse stepped up to include all the forms of abuse listed above. His mother was worse, threatening me with taking away any children we might have, suggesting she could murder me and get away with it because she had been committed against her will three times. I was living a nightmare and getting more “suggestions” about how I could do things better, be more submissive, complain less, do my hair and makeup before he came home…

My nightmare had officially begun. The worse things got at work for him, the worse they were at home.

I got no medical care for the constant migraines, no help for the pain, and no one believed there was any abuse going on — Michael’s trap had sprung, and there was no way out to be seen. To make matters worse, I had a number of miscarriages — the first while he was away at training. I begged the nurse not to tell him, but she did. His response was to yell at me over the phone because I’d embarrassed him by passing out at work in the PX and having to be sent to the big military hospital. I had more miscarriages once we were in Chicago — these became the reason he wasn’t doing well at work. I stopped counting how many children were lost to the emotional stress, the abuse, and my health in general.

Children were supposed to be the super glue that would hold the marriage together and “soften” Micheal’s attitude at home. Finally, finally, I carried into the second trimester. Then the bleeding began, then the cramps, and the dreaded call to his office. I will never forget the drive to the military hospital or the corpsman running and yelling down the hallway not to do the DNC because I was “still pregnant.” I’d lost my eldest‘s twin. I was devastated. Michael’s response was to say “you can’t even be a woman” to which the medical officer responded with a true military dressing down. As much as I loved hearing that, I knew I’d pay for it later. 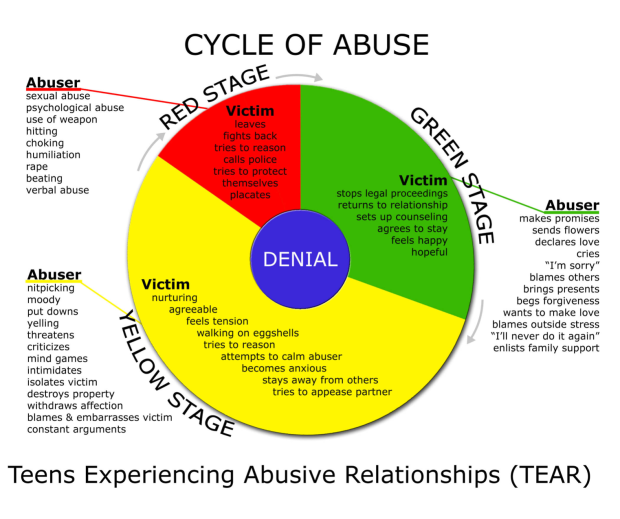 Then something wonderful happened — we entered into a long “honeymoon” period like the green stage in the “Cycle of Abuse” graphic above. I was put on bed rest and could only go to the doctors appointments. Micheal was having “trouble” at work so he “couldn’t” take me. It was two busses and forty five minutes each way. Most people look at a woman in an abusive relationship as weak, cowardly, and pathetic — trust me, it felt that way, but once I knew there was a chance of carrying this precious child full term, my GIRL POWER came out.

I took those bus rides weekly and got to know the drivers. The mall that was the “layover” stop had a Gyro shop right next to a Godiva Chocolates shop. It was heaven! The security guard began meeting me with a wheel chair when he saw me sitting on the bus bench because I refused to do ANYTHING that might cause my precious baby to be lost. I was taken to the Gyro shop where they made sure I was fed well, and treated to a “sample” bag of chocolates. This was truly the best time of my young marriage. It was also the best time of my migraine life — there were hardly any migraines!! Unfortunately this period only lasted a couple months. Cramping and bleeding started again, I would call Micheal’s office only to have him find me passed out on the bed with the phone on the floor.

The abuse came back full force, the tension brought the migraines back, pain was constant, fear was unrelenting but I’d found the one thing needed to be strong enough to get through it all — the life of my child.